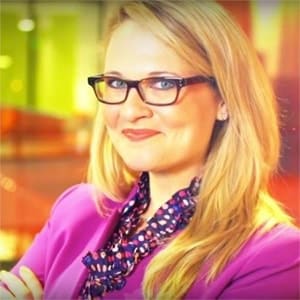 Anna Ruth Williams was a political press secretary in a former life. After the last race she worked in, which brought her to Atlanta in 2010, she realized she didn’t want to do it anymore. The pace was grueling, and every November she found herself basically unemployed because the election was over. She was ready for the private sector, and she knew she wanted a fast-paced agency life where she could collaborate and work on multiple projects at a time.

Anna Ruth found herself at a small agency representing technology clients, and though she loved it, she realized the agency model itself kind of sucked. You had to clock in, you had to clock out, you had to take exactly an hour for lunch, you had to request if you wanted to go on vacation… All of these were horribly un-millennial processes that stifled creativity, and Anna Ruth couldn’t accomplish what she wanted to for her clients because of the actual agency structure – so she decided she was out.

From there she went to work for a startup that didn’t make it, and the idea of looking for a normal job again didn’t sound appealing. With her former client base still reaching out to her, Anna Ruth realized that maybe she could be a consultant. She decided to make the leap and take control. She woke up the next morning, created a logo, made a 90-day budget, put together a pipeline of everyone she knew that might give her business, and then she drove to her mother and stepdad’s house, and she asked them for her wedding fund. She told them she’d never ask them to pay for a wedding and didn’t even know if she’d ever want to get married – but if they had saved money for the day, she wanted it to start her business.

And thus, AR|PR was born.

What separates AR|PR from other marketing and PR agencies?

Anna Ruth Williams: At AR|PR, we have three things that separate us. One, we only focus on the technology industry. We are experts in technology, and it allows us to own work quicker, and really understand the nuances of what’s a very dynamic ecosystem.

We also have super cool culture. Unlike the last agency I worked at, there’s no dress-code. There’s unlimited vacation. There’s flexibility, you can work from home. It’s a very cool culture that hopefully engenders collaboration and creativity, rather than stifling it.

And then the third differentiator is our 360 degree approach. Unlike a lot of PR agencies, we don’t just do press. Now you have social media shops and these content marketing shops that are popping up. Really what makes a company successful is when they de-silo marketing, and they look at marketing communications as very collaborative and synergistic. 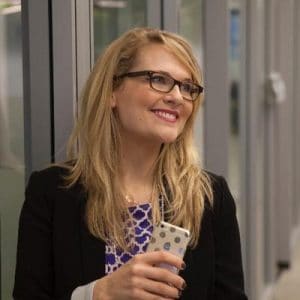 What do you feel the biggest challenge that you’ve faced professionally has been?

Anna Ruth Williams: Related to this career, to this job, it was probably just the lack of business knowledge. I didn’t have a MBA. I was just a girl that did PR really well. So, every day is kind of a crash course in business school. In that respect too, I have no desire to actually go and get an MBA now. I feel like I’ve learned so much. I really like experiential learning.

With that being said, you do have to seek out knowledge. At AR|PR, each one of our employees gets $100 in professional development a quarter to spend however they want. Whatever lunches, networking, or conferences they want to go to; they have $400 a year. We also put on monthly lunch and learns for them as well on different topics.

Did You Know?
75% of PR executives are male, and 86% of the workforce is female.

What qualities do you look for in employees?

Anna Ruth Williams: I like to look at the strengths and weaknesses of the team and plug-in talent where we need diverse skills, personality and so forth. A good manager knows how to manage and mesh a team together based on personality and skill strengths.

I do like an entrepreneurial quality, to some degree. It doesn’t’ have to be very strong, but I like everyone to feel like they can make a difference in the business, and that they want to. Every day, from day one, even an entry-level employee gets entitled to new business commission. If they want to go close some business or help us up-sell some business, they’re entitled to commission for that. I want them to feel like they’re empowered to grow the company.

I really just like grit. I really look for grit, and someone who has had some real struggle in their life, I think that bodes really well for this kind of environment. Because, everyone is going to struggle in their own ways here and there. As an organization, we’re an early-stage company, and we’re growing fast, which means we’re going to encounter some really intense lessons, both on the positive and negative side. Someone that has the grit to look at that and be like, “I got it, next time,” you know? I look for that.

This is blunt, but when someone comes in and is like, “Well, I have my masters degree, I demand more money.” I don’t care about their masters degree. That, to me, just means that they spent two years not getting experience, and just studying and drinking beers four nights a week. I don’t really care.

I would say the main quality is just grit. And clearly openness, so they can come in and be a cultural fit and want to learn about our clients, our team, and our ecosystem.

Anna Ruth Williams: Yeah, there’s been one person that’s probably the most influential. Her name’s Bernie Dixon, and she started the Launchpad 2x program. she was influential not just because she is a powerhouse and she taught me a lot of things, but she also opened the door and introduced me to a lot of other women to network with in town – middle-aged women of whose shoulders we stand on that I wouldn’t have met otherwise.

I grew up with my dad as a pastor and my mom as a schoolteacher. So, to become an entrepreneur or to have any business sense? That was not in my DNA, that was not supposed to be. But what I realized, through the experience and the door Bernie opened for me, is that they’re really good qualities to have as a CEO and as as someone who wants to blaze a trail. She gave me the inspiration by opening doors and by teaching me how to cultivate those qualities in myself and focus them in the right ways. There’s a lot of women who have done the things that I’ve done before, to a much greater scale, to a much greater degree of success. And just finally getting to a point in my life where they were accessible to me. I was able to really get under the hood and see how they’ve been successful. That’s probably been the most transformative thing, and I owe that to her.

Organization Tip:
If someone sends an email that I need to review I ask them in the subject line to put “FYR” – it stands for ‘For Your Review’ – next to the date. That’s how I work through my inbox, versus being overwhelmed that I need to look at 20 emails. I just look at the subject line and say, ‘Oh, these are the ones that need to be for my review today.’ I open those first. It helps me prioritize my inbox.

What 3 pieces of advice would you offer to someone looking to start their own business?

Anna Ruth Williams: One is that you just have to do it. I just told this to someone the other day, you feel like you’re putting yourself on this huge line when you put up a website or create your Linkedin page, or change your profile picture to your company logo. It’s scary, but you have to because if you don’t you’re really running the risk of people not being able to support you. You have to formally put yourself out there for people to want to take you seriously and to want to help you. They do want to help you. 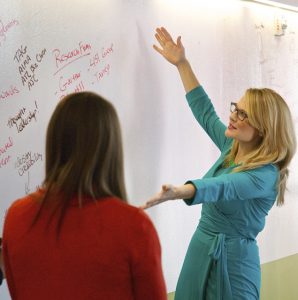 The second piece of advice is a lesson that Bernie taught me, which is ‘Hard on the issue, soft on the person.’ Business is not personal, people are personal. People make your business, and you should have wonderful personal relationships with them all. But you should also be able to come and sit in a conference room and absolutely hash out a paragraph, or hash out a piece of design work, or talk real about a budget, you know? That makes people better and that actually, I’ve found, makes friendships stronger too. At the end of the day, we can have those tough conversations, and we can make fun of things together, and we can also have a glass of wine and talk about boys.

And the third piece of advice is to focus. I first started AR|PR when Steve Jobs’ biography and movie came out. When people would talk about his life and legacy, they honed in on his ability to have hyper-focus. And I took that to heart. There was about a year and half of this business where I don’t even remember what I did. I could not tell you if I took a vacation, where I went, how long it was for… I could not tell you if I bought new clothes. I cannot tell you anything about what happened. Honestly, I don’t even remember where I spent my Christmases those years. I was so focused on the business, because I had to be to get where I was going.

Think of it like jump-starting a diet, when you like cut out carbs or something. Like, you’re hyper-focused, and you have to make this big sacrifice up front. If you want a lifestyle business, no problem, you don’t have to focus that hard. But, if you want a revenue-based business, you take some inordinate focus for some period of time, and that’s what I did. I don’t regret it. I don’t remember it, so I don’t regret it.

Fun Fact: What Movie Best Describes Anna Ruth’s Life?
I really liked The Intern. She was my spirit-animal. She was married, but she did not have a perfect home life. Her situation with her parents was less than ideal. But she wanted all her relationships to be great, but she struggled to make them all picture perfect as a CEO. That’s just the reality of working womanhood.

Today, Anna Ruth Williams‘s company, AR|PR, has 14 employees in two offices (Atlanta and New Orleans) and will soon be opening a new office in San Francisco. You can follow her at the links below: