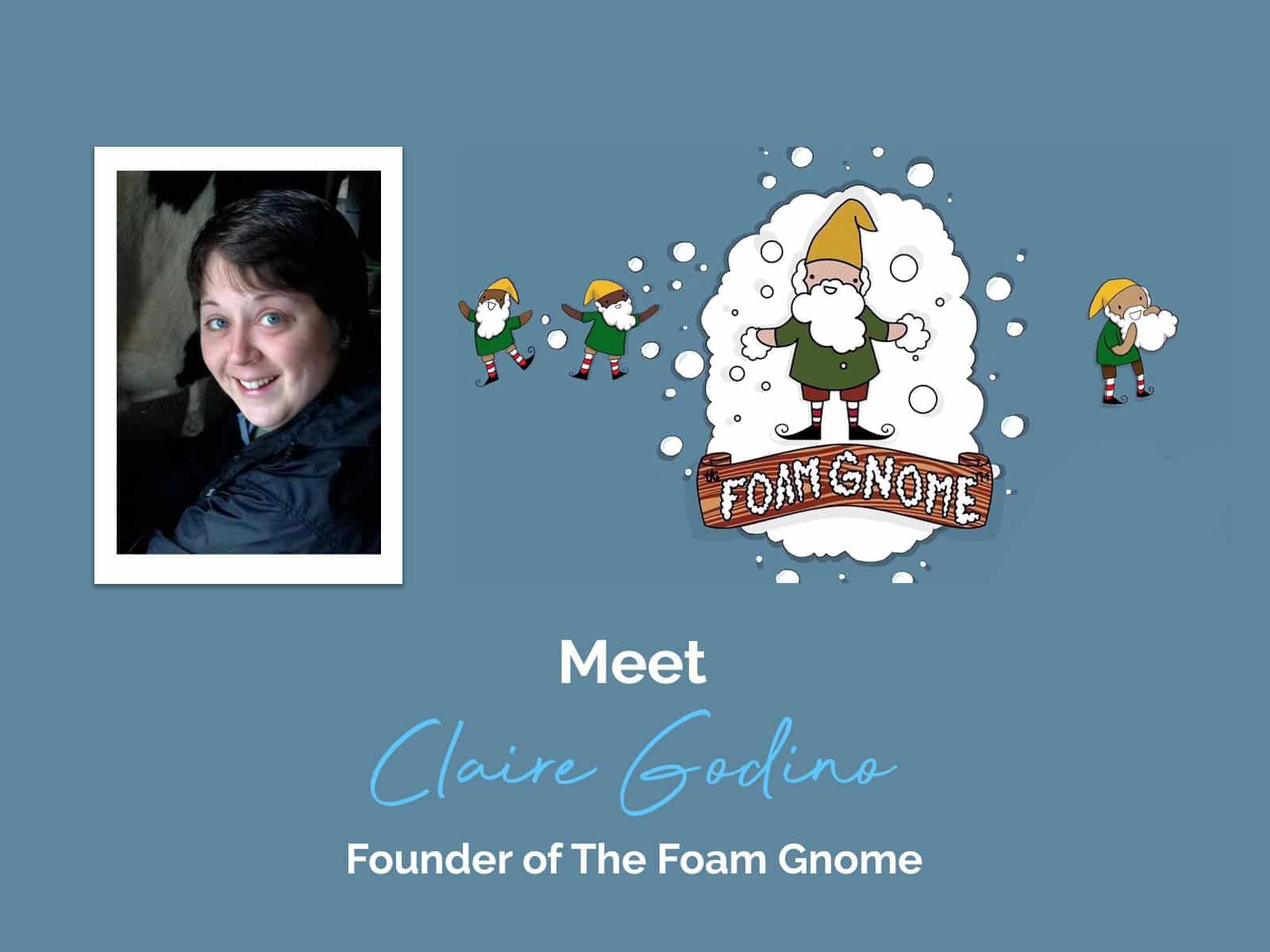 Claire Godino has always loved science. Her grandfather was a Ph.D. chemist for the state of Florida, and when she’d visit him as a child, he’d pull her off to the side and give her lectures about terminal velocity and surface tension. They’d spend hours looking through all of his patents and performing experiments. Claire knew that she wanted to be a scientist in some capacity ever since.

An extreme passion for cooking almost had Claire enrolling in culinary school, but ultimately she decided she wanted something that felt more stable. She opted to get her B.S.A and M.S in Food Science at the University of Georgia. It was there that she fell in love with microbiology.

During undergraduate and graduate school, Claire worked in several microbiology laboratories on campus, and eventually, she did her thesis on foodborne virus detection. In 2012, she wound up landing a job at a national public health laboratory working with the same foodborne pathogens. She stayed in that lab until 2015 and then moved to a different group within the same facility doing immunological research and diagnostics in wild animal populations.

Learn more in our interview with Claire below!

Our Interview with Claire Godino, Founder of The Foam Gnome

What should people know about The Foam Gnome? And why are you passionate about it?

It’s no secret that children have a reputation for being germ spreaders. But my passion for children’s health and hygiene was ultimately magnified when my own son started attending daycare. He brought home everything, and both of us were always sick. Given that he was just a toddler at the time, I noticed that even though his teachers and I had taught him how to wash his hands properly, he would play at the sink when an adult wasn’t right next to him to help. Like every task I’ve ever taught him as a parent, I wanted him to do a good job on his own because he wanted to, not because I was telling him to. Like many other parents, I struggled through years of trying to find ways to teach and engage him, but ultimately it came down to me having to be with him every time to make sure that he did what he was supposed to do to keep himself, and me, healthy until he was old enough to do it on his own.

A few years later, one of my colleagues at work was getting her M.P.H. and was writing her thesis on children’s handwashing education and statistics.  I was shocked to see how little evolution had happened in the field of hygiene education since I was a child. Most of the things I encountered were posters that were either too complicated and boring for small children or they required a parent or teacher to constantly be engaged with them to ensure that their standards were being met. It was at that point that a light bulb went off, and I started brainstorming ideas to help improve the overall compliance and effectiveness of the education that was available to kids. There was nothing out there that really got their attention and held it, nothing that rewarded them in any way that felt like accountability, and absolutely nothing that encouraged children to wash independently.  I started to think about what motivates children to do a good job and realized that mixing repetition with a sense of pride and independence was a great driving factor.

The Foam Gnome system encourages children to do well because they want to, not because they’re being told to.  The instructions are presented in a book that allows them to become invested in the characters and the reward system helps them to feel good about their achievements.  This combination motivates the kids and give parents a much-needed break from constant monitoring. 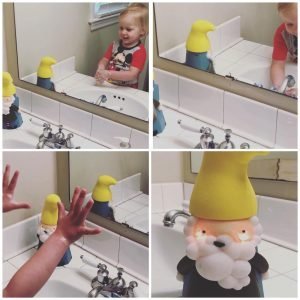 You have a book that goes with The Foam Gnome. Can you talk a bit about that story and how it resonates with kids?

The story begins with The Foam Gnomes playing in their neighborhood when along comes a dirty old troll who lives nearby. The troll asks if he can join in their party, but gnomes send him away because they feel that he may bring germs and dirt into their homes. The troll returns to his cave, very upset that they won’t play with him. The gnomes feel bad, so they decide to teach the troll how to take care of himself. They go through the steps of how, when, and why to wash their hands, and the troll listens and follows their directions. When he is clean, the gnomes’ faces light up with glee, and they invite the troll to stay for their party. And they all live happily (and healthily) ever after!

The story ties in with the dispenser when its cheeks light up after washing just like the gnomes’ cheeks do for the troll in the book. The idea was always to have the book and the soap dispenser operate in tandem to create a very robust system that evokes a sense of independence and pride that is extremely important and an age-appropriate development for preschool age kids.  By engaging these feelings, children develop a desire to do a good job for themselves and for the gnomes; the repetition of these steps in conjunction with the positive emotions is what eventually builds outstanding habits.  The satisfaction that they get out of the whole process has been an incredibly validating thing for me to see come to fruition in real-time, and ultimately, this been the key to its success. 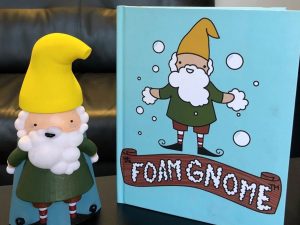 From deciding you wanted to create The Foam Gnome to getting a prototype made – can you walk us through the process?

When I first started the process, I’ll admit that I felt lost. I have never spent time with anyone who has started a product-based company. I think at one point, I googled, “how to start a business,” and I found out about the SCORE Atlanta program. They offer classes, mentoring, workshops, and networking in the metro Atlanta area, and it became a great resource for me. It was there that The Foam Gnome system won its first award – a full tuition reimbursement for an extensive business class based on an essay that I wrote detailing the system and my intentions in the market.

Once I had acquired my sea legs via several business classes and private mentoring sessions, I decided to move ahead. I contacted Kickr design, a local mechanical engineering firm in Atlanta, and we were off to the races on the dispenser’s design. I had a sketch of what I wanted it to look like, and a very clear idea of what I wanted it to do, and the engineers were able to tell me early on what was feasible and what wasn’t. Over six months, we met several times to go over electrical diagrams and options for switches and processors. They sent me 3-D mock-ups of the exterior, and we made adjustments for design and functionality. Overall, it was a pretty seamless process, and they did a fantastic job with communication and the final product.

The book was a pretty straight-forward process. I sent my good friend, Lauren Benbrook, a copy of the text that I had written, and she illustrated it in just a few weeks. I self-published through blurb.com where I was able to design the interior and exterior myself and print a few copies to hand out as samples. I’m very happy with the result.

You did a Kickstarter before COVID-19 became a reality here in the states, can you talk about what you the campaign and your decision to move forward after it?

I think that being a successful person requires you to admit your failings in order to learn from them. The original crowdfunding efforts were an extreme failure for me. I think as a product developer, one can be blinded by their own invention. I did not do the required marketing or customer acquisition steps necessary to achieve the kind of visibility needed for the crowdfunding campaign’s success. I sincerely thought that my idea was so good that it would simply “take off” for no other reason than I believed in it. It put a terrible burden on my friends and family to pick up my slack with sharing links and marketing to their friends and, frankly, despite their efforts and enthusiasm, it just simply wasn’t enough. I took a six-month break after the campaign to regroup and clear my head. It’s hard not to feel discouraged in that situation.

After some time to reflect and to generate some new gusto, I reached out to a friend of mine who recently, along with her partner, developed a tabletop game that had tremendous success in the Kickstarter space. I took notes on how they were marketing up to their launch and was thrilled to see their campaign do so well. It was then that I decided to take any information they could give me and move forward with it, so I reached out to them.

The last month has been focused on building a base of interested parties who are not only engaged from a consumer stand-point, but folks who are genuinely interested in their family’s health. I have been boosting posts on social media and set up a mailing list so that I have a direct line to let them know what we have going on and when I’m ready to launch the next campaign. One of the best pieces of information that my friends gave me was a good metric to adhere to on how many subscribers I should have before I launch. It feels nice to have some clear direction in that realm finally, and I sincerely hope that it pans out in the long run. I’d like nothing more than to see The Foam Gnomes succeed in the public health space. 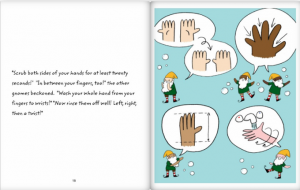 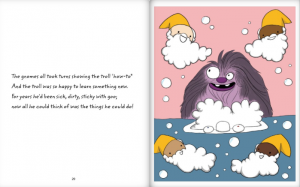 In addition to the aforementioned acceptance and acknowledgment of failure, I’m very interested in having an impact on people’s lives.  Public health is so very important (especially right now), and I think making something that can improve the health and quality of life for so many gives me a tremendous sense of pride.

If you could go back and give yourself three pieces of advice when you first started The Foam Gnome – what would you tell yourself?

What’s next for you both and for The Foam Gnome?

My intention is to keep plugging away with this until it takes off!  I finally feel like I’m on the right track with it, and I am taking the necessary steps to really see its success through to the end!  The Foam Gnome will be launching another Kickstarter soon, likely in early September.

If you’d like to be in the loop, you can sign up at the following link: https://mailchi.mp/c6720c911e3f/the-foam-gnome  I’ll be offering discounted systems as well as special items that will not be offered in stores!

After that, I have already started development on our next few products including a wall-mounted unit for childcare centers and pediatricians’ offices that are lacking in counter space, and I am fleshing out an entirely new system to help with potty training.

Be sure to follow Claire Godino and The Foam Gnome online at the following links:

Emma Loggins Sprinkle
Editor in Chief at Women's Business Daily
Emily Sprinkle, also known as Emma Loggins, is a designer, marketer, blogger, and speaker. She is the Editor-In-Chief for Women's Business Daily where she pulls from her experience as the CEO and Director of Strategy for Excite Creative Studios, where she specializes in web development, UI/UX design, social media marketing, and overall strategy for her clients.

8 Tips For Acing Your Next Interview

Why Accessibility Is Important For Your Small Business